It was a boring, monotonous day at the office. He got tired of looking at strangers who worked there with him. It felt noisy and lifeless at the same time. He waited to discover something new each day. Patiently analyzing this new world around him. A week passed by and he felt lonely with a hundred colleagues and a few new friends. But something of high order already planned for him, that wasn’t anticipated. To fill him with something magical. He had lost the faith he once strongly had. He had waited a long time, to feel the rush that he felt today.

He patiently waited everyday to make her feel good. To know who she was. To make her feel comfortable with him. There were distractions—people getting in his way. She was drifting apart. Then another ball rolled in his favor. He felt the almighty is looking over. Could it be a fairy tale ending or a bitter reality? The days swindled to and fro. He couldn’t understand the flow.

She needed something important, and he stood up to be there in her time of need. Her messages, her calls were always answered. They now had something in common, but this could be the reason for them to part. This road might lead them to disparate worlds. Worlds that only diverged further. He wished everyday for that not to happen. She was the best thing he experienced each day. People around felt his endearment for her but he wondered if she could ever. His life was moving fast, leaving him with dearth of time. How could he move on with his faith left stranded. How could he move on when he’s still fixated with her.

He is trying to merge the worlds with all his power but not any wrong intentions. No deceit, no chicanery. She deserves a future she hopes for. He can’t get in her way. Silently, he watches her drift towards it and away from him. Holding her hand to support and protect her. Guide her. And maybe, eventually, hoping she would find what she longed for.

He has to leave soon
but there’s one last thought on his mind
would he be holding her hand
or would he be losing his faith again?

There are questions to ask. Should he or shouldn’t he? The answer he wants to hear, but fearing the wrong answer. Intricate, convoluted is this feeling. Waiting for the wind to clear the haze, with her standing next to him. 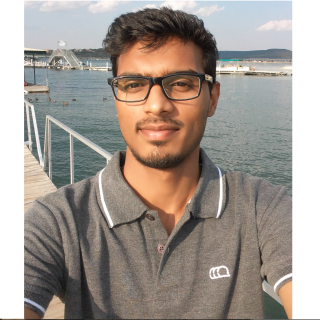